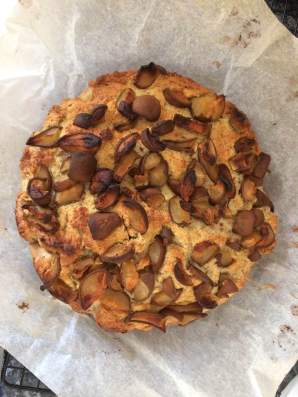 It was Geoff’s book launch yesterday, and I wanted to make something (with mainly wild ingredients) for people to nibble on. We had a glut of pears and sweet chestnuts, so I started looking in the usual places, but chestnuts don’t seem to be widely used in baking, at least in this country. Or when they are, they’re paired with chocolate, which I thought might overwhelm their subtle taste.

I’d heard you could use them to make a (gluten-free) flour, as per the Italian ‘poor man’s cake’ Castagnaccio, which looks delicious – but it contains pine nuts and I wanted a recipe where all the ingredients could, in theory, be foraged in the UK. Eventually I found this recipe from Azalea’s Kitchen, which I’ve adapted by removing the chocolate and adding pears, and substituting fresh chestnuts for the chestnut puree.

This recipe was a great success, yielding a moist, light, subtly flavoured cake that wasn’t too sweet. Everyone liked it. BUT, I’m going to say this right up front, making chestnut flour is labour intensive! It took probably two hours to remove the shells from enough chestnuts (pro tip: wait for them to cool, they come out easier). So if anyone knows how to speed up that process, I’d be glad to hear it. 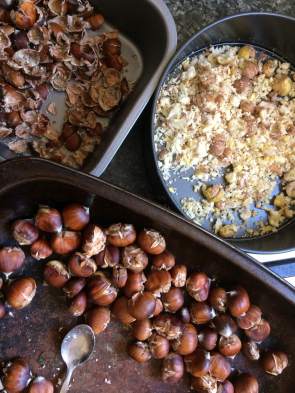 Once they’re shelled, you just crumble them or put them through a food processor. I also spread them out thinly to dry for an hour, as I thought that might help give a lighter texture, but I don’t know how necessary this is.

In future I’d be interested to try this recipe with honey instead of sugar, but I know that can create challenges with texture too, so on this occasion I played it safe!

Leave to cool, and voila! 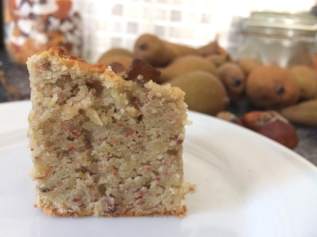